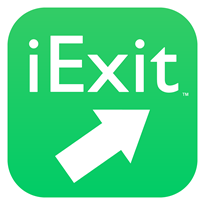 iExit, the smartphone app that knows what’s at every Interstate exit, is partnering again with Cracker Barrel Old Country Store® to promote all of its restaurants along US Interstates for the Summer of 2018.

The American Automobile Association said this week an estimated 93.6 million people will drive during the holidays, which would make this the busiest holiday travel season on record. The 93.6 million estimate is an increase of 1.5% over last year.

Starting today through the rest of 2016, iExit for iOS will be free to download. Down from the usual $0.99, iExit will be free through January 1, 2017, at which point it will go back up.

iExit, the smartphone app that knows what’s at every Interstate exit, is partnering with Cracker Barrel Old Country Store® to promote all of its restaurants along US Interstates during this holiday season.

We’re excited to announce that iExit has teamed up with Yelp and now offers their ratings and reviews for Interstate-based businesses in our iOS app. We will be updating our Android app by the end of 2016 to do the same.

You’ve been asking and we’ve listened. Today we’re updating our iOS and Android apps to address the most popular feature request we’ve received over the past 2 years: Gas Prices!

iExit Gas, the "Cheap Gas Finder for the Interstate", will be released in the iOS App Store on February 1, 2016 for an introductory price of $0.99.

iExit featured on The Today Show

iExit was featured on The Today Show this morning as a top app for summer travel. Randi Zuckerberg joined host Hota Kotb and guest host Ellie Kemper to discuss her top apps for the great outdoors, which included iExit.

Welcome to the new iExitApp.com

Welcome to the brand new iExitApp.com. We have completely redesigned our website in order to transform it into a functional web application. You can now use iExitApp.com to access all highways, exits, and businesses found in the iOS and Android apps.